How we prepare it:

A while back we discussed how to make fresh bread crumbs from whole grain bread. It's a cheap way to prepare them and will last for a while. A friend posted a reminder to our facebook site that you can freeze them. That's exactly what I did and I have had enough for several meals.

Our local grocer had boneless pork steaks, more like a boneless center cut pork chop cut thick, on sale for $1.98 lb. This is a great deal as they were trimmed, very lean and boneless....2 packages will make 4 meals for us with left overs for lunch. 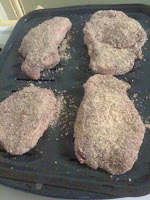 We took 4 pork chops, 2 appx. 6-8 oz and 2 appx. 4 oz and seasoned them with Mrs. Dash and pepper. That's it. Then coated them in the whole grain bread crumbs and placed them on a broiler pan that was sprayed with an olive oil based non stick spray. We also spray the pork chops to help brown them.

Bake them at 350 for about 30 minutes. I don't flip them. The vents in the broiler pan help to brown the underside. Crispy beautiful golden brown!

Our steamer has both brown rice and barley base for the pilaf. I have started using 1/2 barley in my brown rice dishes. It's delicious as well as high in fiber and lowers cholesterol. This pilaf simply has 1 cup fresh tomatoes, 1 tablespoon garlic, pepper and 1 tablespoon olive oil.

Heart healthy, low in calories, low in fat and virtually no sodium....
Posted by Rural Living Hobby Farm at 7:03 PM