Where's Silky? Our guess is as good as yours.... 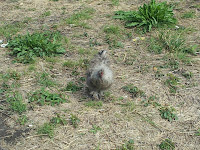 A few weeks ago we blogged that he had been missing but we found him. See our post A heartwarming rescue!
Now, Silky is missing again and has been for several days but we think he may still be alive and somewhere near.

We had noticed a while back that he kept to himself in the back of the acreage, the part that borders Gene's corn field. It was where, over time, the corn cob hulls were dumped after harvest. You can see decomposing corn cob hulls all along the property line when we shred, an obvious plethora of good food for a little rooster.

The humorous part was that he was always alone, quietly keeping his secret from the others. We also noticed he was the last to leave the roost and the last to return. Perhaps it was his strategy to keep the amazing find secret. I walked out one morning to go to my 9-5 job and found him still near the roost.

It is a fair walk for a rooster to get to this honey hole.

Then we noticed he wasn't returning to his roost each night and as of posting this, we still have not seen him. Somewhat concerned we knew he was being quite covert with this spot we have theories where he is or what happened to him.

1. We think he may have stopped coming to the roost and has created his own roost in one of the barns or trees, closer to his glorious find. We also have old boats that no longer run that are parked in an area in the pasture. He may be there although I am not going to look for him for fear of running into a good sized snake, big male raccoon or other things that wander in the night.

2. He could have wandered into the cornfield in search of bugs and got lost. This is quite possible. The stand on the corn is now 4' and the rows are very long. For a tiny chicken, he'd get lost in a big hurry. Again, I am not going to search for him for fear of running into a big snake, or other critters that frequent corn fields as they are growing.

3. A hawk could have snatched him. This is also quite possible. This time of the year you see a lot of them cruising over the corn fields and our back pasture looking for quick meals.

5. A coyote could have eaten him. We have heard them on the move quite a lot lately.

6. A snake bit him. While we haven't seen any that are venomous this year we know they are out there. Several of our friends have killed them and a little girl was bitten twice by a rattler. She's fine - now.

So, we may never see our fuzzy feathered friend again. I'll miss him. I know he was a wise one. Friendly. But on the farm things happen beyond our control and we cannot fret and must just let it be. That is a lesson you learn  quickly if you're going to stay. But -then again - we may be blogging someday that he returned or that we found him.
Posted by Rural Living Hobby Farm at 1:51 PM