My favorite salad dressing is Ken's. It is always made from an olive oil base and the nutritional data is excellent. It has a bolder taste and it good for creating heart healthy dishes as well.

Chicken Caesar Parmesan has become one of our favorites because it is tasty and very quick.

This is how we do it 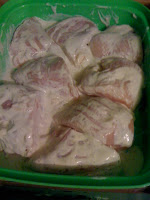 I usually serve this with steamed vegetables and a steamed whole grain pilaf. If there is any left, you can slice the chicken for a wrap with plenty of fresh vegetables and the left over Ken's Caesar Salad Dressing.
Posted by Rural Living Hobby Farm at 6:26 PM No comments: Links to this post

Dinner on the Farm

Oh my these fried potatoes are So good!

Yes, you can have your fried potato's and eat them too.... and this is how you make them heart healthy:

I cubed up 2 large russet potatoes and "fried" them in 2 tablespoons olive oil. Don't use salt, instead use plenty of garlic and onion powder.

Regular french fries that have been deep fried...are more than double the calorie and fat grams...these you can eat guilt free....once in a while. They are rich in carbs but a pretty good source of fiber. The olive oil is the deal maker.
Posted by Rural Living Hobby Farm at 6:55 PM No comments: Links to this post

Once everything is planted, water gently. You want to make your soil damp, not wet. Then snap the lid on and wait. It may take a couple of weeks before you see your seeds appear. Meantime you will notice condensation in the container especially on the walls. Don't worry! That is the greenhouse effect.

One tip tho, if the seedlings are becoming leggy (tall and pointing to a sun source) simply take them outside during the day in the sun. I keep old window glass on-hand to cover the tops while they are outside.


Posted by Rural Living Hobby Farm at 9:26 PM 2 comments: Links to this post

John asked me Saturday morning if I had seen Silky. Silky is our most gentle rooster. We just inherited him about two months ago from some friends down the road who were thinning down their rooster population. 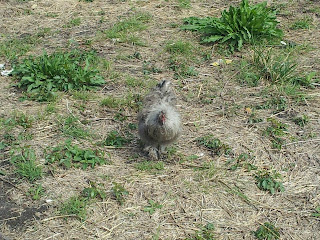 Silky will come to you when called and will allow you to pick him up and hold him without a fuss. In fact he is so tame that if you don't watch he will jump up into your lap and nestle down for a nap.  From the minute we got him we fell in love with this little fuzzy rooster who never crows and looks like he wearing his pajamas.

I had not seen him, which isn't unusual with my work hours. John mentioned he wasn't in his usual roosting spot for the night. We feared the worse.

On Saturday morning John drove the perimeter of the property by the road and looked but never saw him. He didn't come when you called him, and wasn't within eye-shot of us while we were working on the new garden spot. Quite unusual for our Silky. We just knew.....

While trying to adjust a part on the Green Machine John walked back to the patio to find the tool he needed and in a few minutes he hollered for me to come up there. "I need some help" he shouted. As I got closer he said "I found Silky".

"Oh no!" I replied, hoping that we wouldn't find Silky if something dire had happened to him, which has been the case with other "favorite" roosters we have had and lost in the past.

Apparently he had wrapped a string around one of his leg. Perhaps as he did the scratch dance the string  wrapped around a stick which lodged between the swimming pool pump out-take hose and something else. He was simply stuck and settled himself down until someone discovered his predicament.

I brought out a pair of scissors and clipped him free then set him down and clipped off the string. We brought him some scratch and he ate it out of our hand, obviously quite hungry, which attracted the other roosters looking for a hand out as well. After eating and getting a good drink of water he was, once again, on his merry way in the pasture looking for bugs and seed.

Last night John checked to make sure Silky was in his usual roost. He was.

Today he looks just fine. He has a minor issue with an eye but it's nothing to worry about. Otherwise you would never know of his predicament the night before.

John just happened to walk over to the spot where Silky was, looking for something. We had passed close to that spot several times but because Silky just "coos" and the view is somewhat blocked by a patio table and b-b-q serving cart we never heard or saw him.

Perhaps there was some Divine intervention in the necessity to adjust a part on the Green Machine....
Posted by Rural Living Hobby Farm at 2:11 PM No comments: Links to this post