On a hobby farm there is always a while lot of waiting. It's the most difficult job on a small farm, or it is for me.

This week is no exception.

We are waiting on some crucial funding for additional equipment to move us forward faster and to enable us to work more efficiently. We have secured enough for the tractor we want but we are waiting on additional funds for other equipment and for some consolidation funds to help to pay off some other things and to purchase a much needed disker.

In my opinion those funds should have already been in place but there hasn't been any communication from the lender in two days. Not a word. So, we wait.

We are also waiting for the tractor funds to be electronically deposited into our account. It takes up to three days and today is day two. And, we wait some more.

We also have a new farm credit line but the final paperwork and access card has not arrived. We are hoping it is in today's mail. Again, we are waiting.

Yes, on a hobby farm you are always waiting. For a crop to start producing, for rain, for a part, for eggs to hatch it is never-ending.

I guess it's a lesson I need to learn. Next year we'll be applying for operational grant funding...and the government is slow...

Watch the Rural Living Facebook site for up to the minute info on our funding finally coming together...
Posted by Rural Living Hobby Farm at 7:33 AM No comments:

Life on the Farm - Chuckie and the Roo 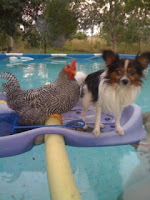 This evening we received a call from some Rural Living readers who live in the next little town from here. They had a couple of roo's that "Had to go!" and of course we are glad to take them. Always!

One of them they had named Jailbird. Apparently his feathers were much more pronounced when he was younger and they said he looked like he was wearing the traditional jail attire of days gone by. Friendly fellow, he didn't cotton to the other, more mature roo's trying to fight and establish the pecking order, pardon the pun. So, we simply picked him up and took him further into the pasture so he could acclimate himself to the farm before going to roost.

As the sun went down and the other roo's headed to their roost, this little fellow didn't follow. Instead, we were in and out of the swimming pool, taking and evening dip when this little roo made his way up the ladder to the pool.

Chuckie, our Papillion, has his own float. This actually is a Rubbermaid snow toboggan that we run a noodle thru so that it is stable. Chuckie floats around on this and occasionally and with much coaxing, takes a swim. Chuckie had just climbed aboard and had not been on his float when this little Roo made his way to the pool.

John moved the float to the ladder to see if he would climb on and much to our surprise, he did! Now, if you look closely at Chuckie he isn't too happy about his passenger. Eventually Chuckie just jumped into the pool and the little Roo made his roost on this float.

John had to get out of the pool, pick up the little Roo and walk him over the roost.

Yes, at the Rural Living farm it's always something!
Posted by Rural Living Hobby Farm at 9:19 PM No comments:

Email ThisBlogThis!Share to TwitterShare to FacebookShare to Pinterest
Labels: A day on the hobby farm, Farm life, Rural living

It's the end of long weekend, back to the 9-5 grind in the morning. Actually it's more like 8-5 and I am thankful for daylight savings time. The good news is that it is a 4 day work week. Well 4 1/2 as I pull Saturday.

We never made it to the winery for slips but hope to be able to do that this week. It's an opportunity I don't want to miss out on. John will be calling winery owner to set up an optimal evening that works for both of us. He said that if we keep them in pots in the shade and well watered during the summer we may have a chance to plant them in the fall. Keeping the babies alive in the summer is a challenge, one I will gladly take.

Also, we got 1 fruit tree in, holes dug for some of the others. It was much too hot to work on it today mid-day. I soaked them down again because I knew we would probably be delayed getting them in. We went to visit a friend in the hospital that had a close call last week who is finally in her own room and then went by Lowe's for some weed whacker supplies. That took all afternoon as it is a 60+ mile round trip. We also visited another friend about 4 miles from the Rural Living farm who gave us more workout equipment (thanks Judy!) and while we were there she gave us a lot of ornamental peppers. Some are edible and have all sorts of colored peppers on them. Beautiful! Will get those mass planted in a lick tub this week. Once we were done with those tasks the day was gone.

Whew! South Texas heat and humidity is coming on quickly. Was able to get soaker hoses run through the 2nd phase garden and secured with landscape staples. Those are a lifesaver for a lot of things! We will be hooking them up to a water source tomorrow afternoon. At least there isn't much going on this week in the evenings and we can slowly move forward. We just cannot do a lot in the hot sun and this will be the case until next October.

What's the weather like in your neck of the woods?
Posted by Rural Living Hobby Farm at 9:50 PM No comments: