On the farm - One rainy weekend

Fall is definitely in the air in South Texas. The temperature has dropped to below 90 during the day and the cold fronts are spurring major thunderstorms that can easily drop 2-3" of rain in a day. Fall gardens are starting to look great and the hummingbirds fall migration is in full swing.

Today I came home from my 1/2 day at the 9-5 and found John working on the dishwasher. The dishwasher and the central air are the two things I would truly miss if we went to a full homestead lifestyle, off the grid and totally providing for ourselves. These last few months that I have been without it have been a challenge but I really didn't mind. There is something about washing dishes the old fashioned way that is meditative. Having the dishwasher again will save me some time in the evenings.

It is suppose to be a bit cooler in the evenings later this week although I don't expect a good fall northern to blow through. I can hardly wait though before that first cool snap, the one that is so fresh you can smell it, blows through. I am more than ready for stews and soups made with fresh ingredients or our heart healthy chili again.

In a couple of weeks our Annual County Fair will kick off. We expect rain only because it seems to be an annual event that coincides with the fair. Years ago it was hosted on county property and parking was in a field. It was also an annual event to get quite stuck during heavy rain years. Now the fair is held at a new arena and events center that is privately owned and while the parking and facilities are much better including toilets that don't fill up and over flow it just doesn't seem the same.

Now to get up and finish some tasks and start some new ones, inside of course, so that we are ready to get back out on the Rural Living farm next weekend.

Posted by Rural Living Hobby Farm at 4:42 PM No comments:

We've recently added a wonderful up-cycle item to the Rural Living store. Our Farmers Market Totes are made from used feed bags we find around the county and sometimes beyond!

Find these at our Etsy store! We will be adding them to the Rural Living store soon.


Posted by Rural Living Hobby Farm at 8:24 PM No comments:

After being without admin permissions for over a month we finally got that issue resolved. We're back! 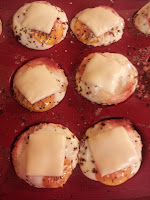 To start the fall season I borrowed a concept that has become quite popular on Pinterest. Pinterest is a great place to find ideas and recipes. The muffin tin is slowly becoming a popular kitchen item but to use for things other than muffins. I hope to give mine new use this fall and winter.

To start we decided to make use of an entire dozen eggs and made these baked egg cups. The recipes vary from using ham or Canadian bacon with a twist on cheese or seasonings. I just wanted something simple that would taste wonderful. So we created the Rural Living version of an egg cup and I must say it is amazing.

1 dozen eggs
1 tin of biscuits (It doesn't matter which kind)
12 tlbs cream cheese (we used a salsa flavor)
3 slices of cheese (cut each slice into 4 pieces)
Your choice of seasoning.

To start we oiled each muffin cup with olive oil. You could spray it with non stick instead.

Next, we flattened the biscuits and cut them in half. Then we lined the egg cup with a half of biscuit. You'll have some left over unless you decide to use a 2nd muffin tin! The thinner the better especially if you are using the big biscuits. If you are using the smaller ones you may can use the entire thing. Just make sure they are rolled or pressed thin.

Then we added 1 tlb of cream cheese. Our local grocer sells a house brand spreadable cream cheese that is salsa flavor. Yummy! Over this we cracked an egg in each muffin cup. Then we seasoned them with sea salt, fresh cracked pepper, some dehydrated onion and a special seasoning, Tomato Basil Pesto that I get from my Tastefully Simple rep.

We popped them into the oven at 400 degrees for about 20 min until the whites were set and the yolks were starting to set. We could also see the biscuits starting to peek up and brown. To finish we used 1/4 piece of a low fat swiss cheese slice on top of each and let them bake another 5-7  minutes or until the cheese started to melt.

That's it! You might want to let them sit for a couple of minutes before removing because it makes them a little easier to remove. 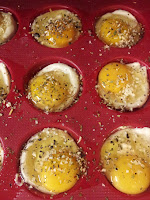 This would be good if you added a deli slice of ham on the biscuit before you add the cream cheese.

Best of all, these freeze! One or two in a ziplock for breakfast on the run during the week! Let me know if you make these and share your versions.
Posted by Rural Living Hobby Farm at 12:28 PM No comments: