We now have started in the mini greenhouses:

108 Cucumber plants.- a good pickle cuc but also a good edible one! Yum sliced thin and used in your wraps! (we prob. won't use all of these and will give away the excess)

48 zucchini plants - CashCrop. We had one plant last us from early last spring until the first frost this year and I picked 2-3 everyday all thru the fall. They produce like crazy so this will be a TON of zucchini!

If the spring cooperates we should have a good crop.... and some to sell..... fingers crossed.

And have started the big food plot. Lots of work to come but it will be all worth it!
Posted by Rural Living Hobby Farm at 5:38 PM No comments:

When a farmer comes a'knockin.... 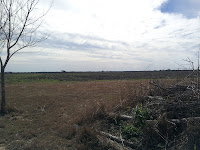 The other day there was a ring at the door and John found Farmer Gene at our front door. He is the one who farms those 400 acres behind our property and usually grows corn. Yes, GMO corn. Read on before you boo....

He was here out of kindness....he knew we doted over our organics and came to tell us it was time for the crop dusters to come and spray Round up on his fields and wanted to make sure there wasn't any drift.

He walked the pasture to identify our food plots.

He didn't have to do that but out of kindness he did....and he is one of the first to admit, if he could make a living growing organics himself he'd do so..... A lot of farmers would agree with him....

Today, John spotted the crop dusters behind the house.

If you look closely you can see it...we had to put it in a photo viewer to see it.

And..by this picture it's definitely winter at the Rural Living farm. I do miss my green...
Posted by Rural Living Hobby Farm at 5:40 PM No comments:

The Chicks are really growing.....

This afternoon just before sun down we moved the chicks to the outside chick pen. All 28 of them. I think. I lost count. John has the number....John got them out of the small pen inside one by one and put them in a small pet carrier to take outside.... two trips.

The chick pen outside is made of redwood. We bought it many years ago at a pet store when we had Cockatiels but kept it after we lost them because it is the perfect large pen for chicks. I think it was originally for rabbits or other small animals.... it's been a good one and we have certainly gotten our money's worth.

It has one big door in the front with two sliding locks and two smaller wire doors that allow easy for access to change out food and water. The roof also hinges open. We keep it on the patio under an awning....so it stays nice and dry....

John bought new water containers and food containers and came home with new chain and hardware to suspend them off the floor of this cage. He did a really nice job as usual!

Then we ran to town for a few things and came home to clean up the mud room......yuck! I don't mind....it's more good stuff for the compost! And with that many chicks it doesn't matter how often you clean it.... it's still a mess, especially when they get bigger and start doing the scratch dance.

It's cooler here but not too bad and the weekend is supposed to be beautiful again. I just hope we both have energy to accomplish and outside task...

What's going on with you this Wednesday??
Posted by Rural Living Hobby Farm at 8:29 PM No comments: